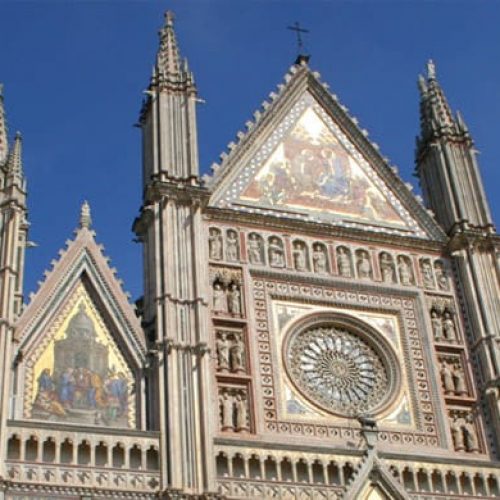 Situated on the flat summit of a large butte of volcanic tuff, Orvieto is a town of dramatic beauty and exceptional historical interest. Orvieto was a major centre of Etruscan civilization in the ninth century BC and was annexed by Rome in the third century BC before being held by Lombards after the collapse of the Roman Empire. Orvieto vastly extended its wealth and power in the thirteen century, joining forces with Florence. However, divided by bitter feuds, the city, at the apogée of its wealth, found itself often at odds with the papacy. Cardinal Albornoz finally took control of Orvieto in 1354. In 1449, Orvieto was officially added to the Papal States and it remained a papal possession until 1860, when it was annexed to unified Italy.

The imposing Duomo (Chatedral), designed by Lorenzo Maitani, boasts one of the most famous gothic facades in the world. Other places of interest include church of San Giovenale, hosting beautiful frescos of the Scuola Orvietana and churches of San Giovanni and Sant’Andrea. Other sights not to be missed are the Pozzo di San Patrizio (San Patrick’s well), build to provide Orvieto with a constant water supply, and the astonishing labyrinth of Orvieto’s underground city.